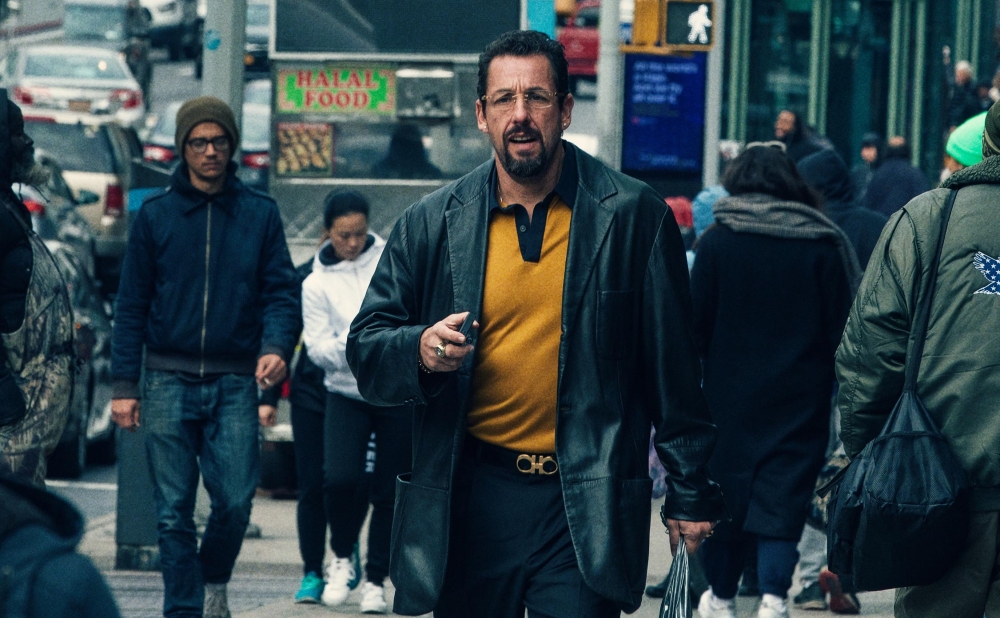 It was around the ten minute mark when I realised what was in store for me with Uncut Gems. It’s a loud, chaotic, messy and provocative piece that fully allows Adam Sandler to showcase his dramatic acting capabilities. Something the cinema world is only greeted with in the smallest of doses.

From the get-go this is his movie, with the rest of the cast merely stepping in as a purpose to serve story and Sandler’s character development into a further state of greed and obsession.

Playing the role of Howard Ratner, A Jewish jeweller who consistently believes his big profit piece is right around the corner. Howard’s life is a flurry of misfortunes, mainly consisting of debt and gambling issues, which ends up drawing in the wrong crowd. To put it simply, he’s a real piece of work.

Uncut Gems dives straight into his world, never drawing you away from it. Dodgy dealings, compulsive betting and a life of impropriety. Not only with Howard, but the people in which he surrounds himself with. Every scene feels like it’s on the verge of erupting, many thanks to its enthusiastic script which has been brought to life in the way of the actors delivery. Basically, the actors just resort to screaming at each other for the majority of the movie which despite keeping very much within the tone, can become rather distracting.

Directors Benny and Josh Safdie may not have given us the most unique of experiences with Uncut Gems, certainly in terms of its social commentary, but it often feels many of the actors are given the freedom of expression with their portrayals.

Idina Menzel joins the cast as Howard’s estranged wife. Their relationship is merely in tact in order to keep up appearances with their children and heavily Jewish family, to preserve the sense of family values. Julia Fox stars as Howard’s sultry mistress. A colleague at the jewell encrusted safe haven he calls his shop. One of the many characters we see strongly caught up in Howard’s destructive arrogance. LaKeith Stanfield considers himself the money maker, as Demany, he’s responsible for many of Howard’s clientele, including high-end musicians and sports stars such as Kevin Garnett, who features and more importantly holds his own whilst portraying himself.

Narratively, Uncut Gems possesses an anarchic energy that matches the likes of its lead performer. Even if you aren’t completely on board with its structure, The Safdie Brothers have crafted what is arguably the most sweaty, pulse racing picture during this Oscar season. It’s the embodiment of chaos, as from scene-to-scene, much like Howard himself, is a ticking time bomb that reaches the only conclusion that seemed possible.