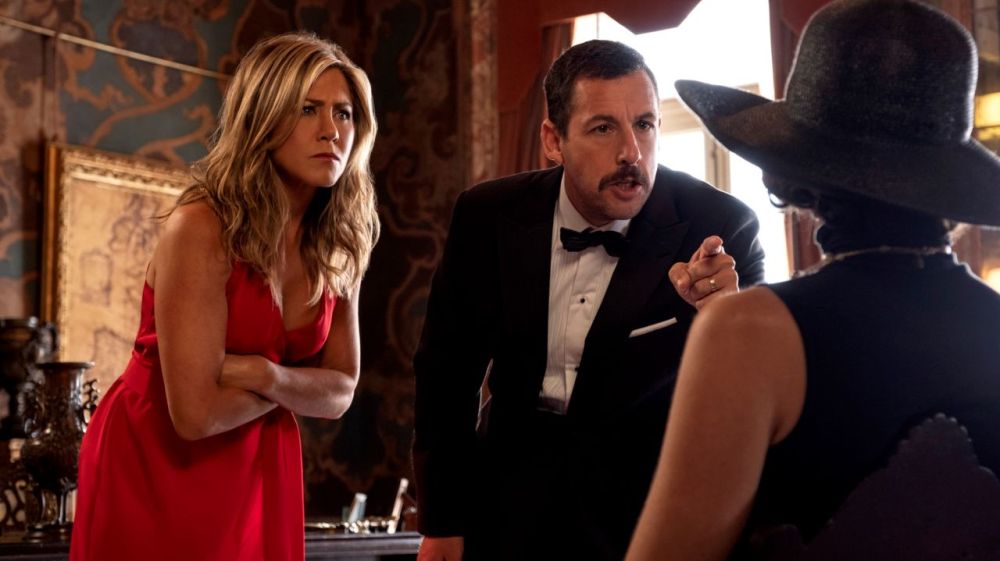 Given the poor reception that the Netflix/Sandler partnership has received, you would have every reason to give this a skip. With one original somehow outdoing the next in terms of its lazy script or agonising attempt at legitimate comedy, its not been the best of runs for the team up. Their latest work revolves around married couple Nick and Audrey Spitz (Adam Sandler and Jennifer Aniston), who take a belated honeymoon trip to Europe. On the way they meet the suave and devilishly charming Charles Cavendish (Luke Evans), who invites the couple to join him on a yacht, owned by his billionaire uncle Malcolm Quince (Terrance Stamp). What seemed like the perfect trip suddenly turns sour when during a signing of Malcolm’s will, which would leave his entire wealth to his much younger wife Suzi (Shioli Kutsuna), he is killed in the dark. With the help of his wife, Detective Nick Spitz aims to solve the case in which the two are considered the prime suspects.

If you’ve seen or even participated in a murder mystery before then it’s easy to figure out where the film is going, because beat for beat it follows the general idea in an incredibly generic fashion. Someone dies, there’s a handful of suspects and plenty of motives to have the finger pointed in all sorts of directions. With the plot failing to achieve anything more than what would pass as satisfactory, the comedy would need to be at a standard significantly higher than what we’ve seen from Sandler in recent years, in order for the movie to gain any sort of success. Fortunately, although by no means perfect, Murder Mystery does present more laughs than most of the recent movies to come out of the streaming giant.

With Sandler slightly reeling in his man-child approach to acting and Aniston managing to pull off what is required in order for her pay check to seem admissible, the two respectfully do enough to make this otherwise derivative whodunnit feel fun and humorous. The cast also consists of Gemma Arterton, Adeel Akhtar, Dany Boon and even British comedy actor David Walliams, all playing your typical motive driven characters.

This is one of the best comedic efforts from the actor that tried and failed many times, but something I always find myself saying during these reviews is the word ‘enough’. This is what the majority of Netflix originals seem to aim for, but is enough, good enough?